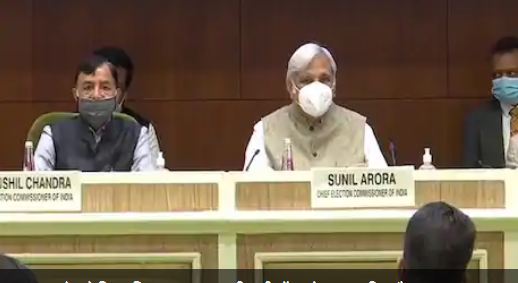 Voting will be held on October 28, November 3 and November 7, results on 10

The dates for Bihar assembly elections 2020 were announced. Elections are to be held in three phases. The first phase will be held on October 28. After this, the second phase will be voted on November 3 and the third phase will be held on November 7. All results will be announced on 10 November. Election Commissioner Sunil Arora said that the term of the 243 assembly member of Bihar ends on November 29.
In the first phase, voting will be held for 71 assembly seats in 16 districts. In the second phase, voting will be done for 94 assembly seats in 17 districts and in the third phase for 78 assembly seats in 15 districts. Election Commissioner Sunil Arora said that in view of security arrangements and festivals, the stages of Bihar elections have been reduced.
The election campaign will be virtual-only and nominations can also be filled online. Apart from this, it will be mandatory for political parties to report criminal cases against the candidates on the website. Candidates will also have to give this information in the newspaper. Action will be taken on the misuse of social media. The Election Commissioner made it clear that due to Corona, more than five people at a time would not be able to campaign at anyone’s house. In the assembly elections, only 5 people, including candidates, will participate in the door-to-door campaign. He also said that during the election campaign it would be mandatory to follow social distancing in public gatherings.
One hour more time has been kept for voting in Bihar elections. That means voting will be held from 7 am to 6 pm. However, this will not happen in Naxalite affected areas. In addition, corona patients will be able to vote in the final hour. In view of Corona, 6 lakh PPE kits, 46 lakh masks, and 1 lakh hand sanitizers will be given to the State Election Commission. This will be used during the election. The number of voters at the polling booth has been reduced. There will be one thousand voters at one booth. Also, there will be more than one lakh polling stations in Bihar elections this time.